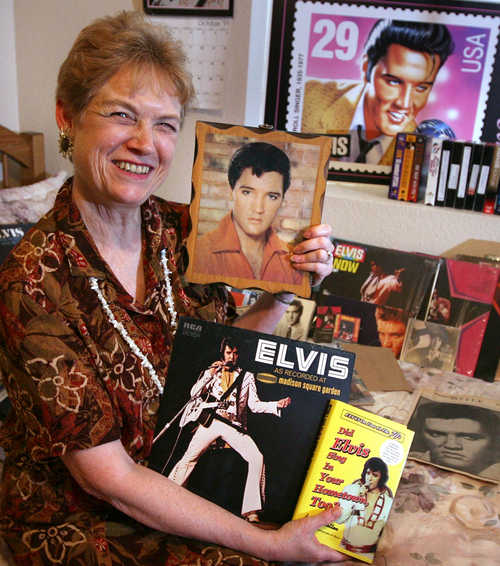 But Taylor, now 63, thinks of him as a man who tried his best to live an ordinary life.

"He’s a phenomenon, but he was a real person," said Taylor, who lives southeast of Lacey.  "That’s the main thing: he was trying to make his way in the world."

Presley died 30 years ago today.  However, some local fans say their love for the King of Rock ‘n’ Roll hasn’t waned in the past three decades and probably never will.

"He had a world impact that can’t be underestimated," Maya North, 51, said.

North lives south of Tumwater but grew up in Missouri where she said, "Elvis was universal.  There was no separating Elvis from anything.  He was in the air. ...  He formed a great deal of my culture."

Taylor also grew up with Presley, who was "the big thing" during her teenage years.  She attended three Elvis concerts in Maryland, sometimes waiting in long lines after midnight to get tickets.

"It was just a mob scene," said Taylor, who also has visited Graceland three times.

However, not all South Sound residents were impressed by Presley’s act.

"Quite the opposite," said Jacqueline Jehle of Lacey.  "I saw the first performance by Elvis on ‘The Ed Sullivan Show’ and remember saying that I had watched this strange young man who wiggled on stage and couldn’t really sing.  What did I know!  My family has never let me forget that incident."

North was a student at The Evergreen State College near Olympia the day Elvis died and remembers being at home when she heard the news.

"It was a shock," she said.  "I felt horror and at the same time I was not surprised in the slightest.  He’d been in such a desperate spin for a long time."

Within days of his death, Taylor had a dream that Presley came to her and told her that he was at peace.  "It was very comforting," she said.

North also was moved by an experience she had not long after Presley died.  While hitchhiking, she got a ride home from a man who had the King playing on his car radio.  She commented that she’d always thought Presley seemed incredibly lonely.

"You are the first person I’ve ever met who noticed that," the man responded with tears in his eyes and then told her he had once worked with Presley.

"I had just touched someone who had touched his life," North said. "I’m still kind of amazed."

In the weeks after Presley died, Taylor started buying up his albums, many of which sold for $1 or $2.  In the past three decades, she’s collected nearly 70 albums, has kept dozens of newspaper clippings about the King and has read nearly as many books on his life.

In particular, Taylor became fascinated by Elvis’ spiritual side, which included a sometimes unconventional approach to religion.

"He really introduced me to seeing religion in a different way," she said.  "It gave me the idea that there are a lot of different ways to do spirituality."

In the years since Presley’s death, North discovered that her stepmother went to school with him and that a distant cousin of Presley’s from many generations ago is related to her husband’s family.  If he’d lived, Presley would now be 72.  "He had two paths to go," North said, speculating about his possible fate if he hadn’t died. "I wonder who he would have been."

Photo credit: Barbara Taylor of Lacey says Elvis has had a special place in her heart since the first time she saw him when she was 12.  Taylor has collected dozens of books, records, newspaper clippings and other Elvis memorabilia. (Toni L. Bailey/The Olympian)

Author:  Heather Woodward writes for The Olympian.  She can be reached at 360-754-4225 or hwoodward [at] theolympian.com.

Get to know him

Take a closer look at the celebrated performer:

More than 1 billion: The number of record units Elvis Presley has sold worldwide.

150: The number of different Elvis albums and singles sold in the United States that have been certified gold, platinum or multiplatinum by the Recording Industry Association of America.

149: The number of Elvis songs to appear on Billboard’s Hot 100 Pop Chart in the United States.

31: The number of feature films in which Elvis starred as an actor.

14: The number of Grammy Award nominations that Elvis received from the National Academy of Recording Arts and Sciences (NARAS).  His three wins were for gospel recordings.

Elvis’ mother died while he was in basic training, but his father outlived him.  Elvis married Priscilla Beaulieu on May 1, 1967, in Las Vegas.  The two met when she was 14 and he was 24, while Elvis was stationed with the military in Germany.  Nine months to the day after her marriage to Elvis, Priscilla gave birth to daughter Lisa Marie.  Lisa Marie was briefly married to singer Michael Jackson and actor Nicolas Cage and has two children by her first husband, Danny Keough.  She is now married to guitarist and producer Michael Lockwood, who produced her 2005 album "Now What."

Elvis died Aug. 16, 1977.  The coroner’s report stated he died of heart disease.  Since then, however, a pathologist who performed the autopsy has confirmed rumors that Elvis died of a prescription drug overdose.  Elvis was 42.

More than 600,000 people tour Graceland every year.  It was designated as a National Historic landmark in 2006.  Since his death, Elvis has been inducted into the Rock ‘n’ Roll, Country Music and Gospel Music Association halls of fame.  In 1997, Elvis appeared (via a videotape) in a live concert with more than 30 of his former band members in a concert in Memphis.  The concert went on tour, shaking up box office sales across the country and in London. Elvis became the first deceased performer to headline a concert tour.  A remix of "A Little Less Conversation" hit No. 1 on the singles chart in 2002. - McClatchy Newspapers 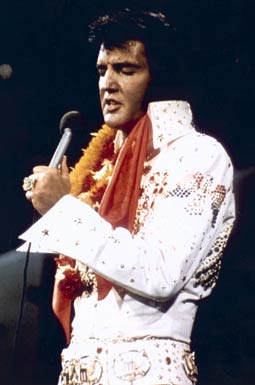 Elvis' personality in the Personality Game system:  Elvis was an Artisan role (high creativity and explains his love for brilliant costume designs), Competing perspective, with Sage influence.  Sages are known for having fun as Elvis is known to do.  He had a Goal of Acceptance, which help account for his well-known politeness and desire to be loved.  His Attitude was Spiritualist, which explains his deep love of gospel music, and his interest in religion, metaphysics and spirituality.  His Mode was Passion, which helps to explain his passionate pleasures, his magnetic sexuality and people's passionate response to him.  His Centering was Emotional with Moving part, explaining the softness and quickness he had (emotional center) and his early unconscious body movements [remember the shaking leg?] (moving center) that he later perfected to a be an integral part of his performance style.  It appears that Elvis' personality dragons were Greed (sliding to Self-Destruction at times) and Self-Deprecation (sliding to Arrogance at times).

I believe his needs were: Community (need to have his family and friends around him at all times), Expression (needing to express himself in his own unique way) and Adventure (explaining his constant desire to experiment and have new experiences).